Any type of high heat grill. Sweet score you got there !!

Would be awesome to see some cheesesteaks with onions and peppers on that bad boy !!

That will definitely happen. My 9 yr old wants to know why there isn't any bacon on it already. She's pretty much a baconholic. Pretty sure it's going to get a little break in Sunday with some bacon cheeseburgers.

I told you that sucker was solid, but did you believe me? Noooooooooooo! You peed down my leg and told me it was raining. 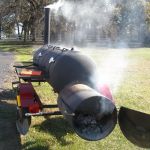 Awesome. Lets get it dirty! b
Top

Alright you asked for it. Had the day off to burn down some PTO. Dropped the wife's Tahoe at the shop so I was at home without wheels. Decided to start seasoning the Blackstone. Then I got hungry. Had to find something in the refrigerator to throw on. The first cook… Back in the day I cooked on one for a fundraiser. Cooked up a bunch of pork chops. Very good! We sold out in record time. Congrats! Can't go wrong with a fried bologna sandwich.

The perfect way to season a griddle!!! Well done!
B
Top

Yeah that 36 will do you good and you got a real good deal on it
CowboyDon
Garland, Texas

I'd love to have one, just don't have a spot for it. I think you will enjoy that!
20" x 40" Party Gator Pit
Custom Mobile Stick Burner
Summerset TRL 32" Built-In Grill
Weber Q2200
48" Custom Firepit

I can't always please everybody. I'm not bacon.
Top

Toby - when I rolled it out on the patio I realized how big it was. I had a Dutch Oven table out there that is being put in storage until I can make some more room. Also removed one of the side shelves. I already had a flat top chest next to it I use for cooking utensils so that saved me some more space.

I have cooked on both the Blackstone and Outdoor Gourmet griddles. Both worked about the same. the Blackstone seemed to be slightly heavier. I would purchase the cheapest one as the utility of both is virtually identical.
www.bigcountrybarbecue.com
Top

I have the Blackstone too. If you are only going to be rolling it around and not folding the legs up, get some good metal screws and screw the legs about 2in from where they pivot. Mine and my dads got a little wobbly until we screwed them. Go get a bag of cheap bamboo skewers. When you are cooking something with a lot of grease, put the skewer in the drain hole of the griddle top. The end should be in the grease tray. The skewer should be at an angle, touching the left side of the drain hole. The grease will now run down the skewer and into the tray and not down the leg of the griddle as sometimes happens. Especially if it is windy. Speaking of wind, keep a roll of foil nearby. If the wind picks up, make a long snake out of it and shove in the gap between the griddle top and the frame to block some wind. Lastly, treat the griddle like a cast iron skillet. Use a paint scraper to scrape the crap off. If it gets bad, heat that bad boy up and pour a little water on it. Whatever is on there will come off. Don't forget to season after that.
Top
Post Reply
37 posts