Finally made it out to Hutchins this past weekend. I have been wanting to try them for a while and my good buddy Tim ( Tinye11) was my tour guide for the day. When we arrived the parking lot was packed but we just walked up to the counter and started to scope out all the goodies. I ordered the brisket rib combo, guy at the counter asked point or flat - always a good thing. Asked for a lil bit of both and he sliced away. Sliced up some St.louis ribs as well and then the sausage caught my eye. What kind ya got there? Jalapeno. Throw some on there as well. Dished up some tater salad and mac n cheese. Then I found the fried okra and ordered some sweet tea and I was good to go. Sat down and started with the brisket, nice bark and smoke ring. Nice taste with a nice pecan smoke taste that is not overpowering- flat was a tad dry but still good. The point was spot on with the meat melting in your mouth.Some of the best around that does not come from the backyard. Ribs were cooked just right for me, bite through with a nice rub, liked them alot as well. The sausage was good as well with the jalapeno adding some nice flavor. Used some sauce on the sausage and okra and it was a light sauce with just enough twang.Sides were real good, enjoyed the tater salad and okra, mac n cheese had a lil bit of too much cheese for me. Desserts are free and are serve yourself- Ice cream, banana pudding and peach cobbler. Service was great and the atmosphere inside is what a BBQ joint should be like. Got to check out all the pits afterward and we both were quite impressed. Overall one of the best overall BBQ meals I have had to pay. Will go back next time I'm up that way.

As Memphis Rains said on Gone In sixty Seconds- I am a baaaad man! Was a long ride home though.

Pitmaster Crispin with ABT's on one of two trailer smokers.

Chicken and turkey on the other trailer, rotisserie.

Inside rotisserie, Chrispin says they cook about 150 slabs of ribs a day.

This one cooks the packers, they were fixing to put the briskets on for the next day 14 to 16 hours cooking time.
Chrispin really enjoys his job, heck of a nice guy!
How bout some more beans Mr.Taggert? I'd say you've had enough!
R & O Custom Trailer
Weber 22.5 Gold
Weber 22.5 Smoky Mountain
Oklahoma Joe Longhorn Edition
Limey BBQ Co. Competition Team
Top

Real nice review Chuck, they got in going on thats for sure
CowboyDon
Garland, Texas

Who wouldn't love a job like that?? Nice review brutha!!

Glad you enjoyed it. I love me some Hutchins BBQ.

Hollar next time you are up in the area and I'll try to meet you there. Not too far from my house.
20" x 40" Party Gator Pit
Custom Mobile Stick Burner
Summerset TRL 32" Built-In Grill
Weber Q2200
48" Custom Firepit

I can't always please everybody. I'm not bacon.
Top

Nice review Limey and looks mightyfine.
Suppose you were an idiot, and suppose you were a member of congress; but I repeat myself - Mark Twain
XL, Small, and Mini BGE
Top

Hutchins in Mckinney is my go to BBQ place to eat inside. If weather is nice I go east of Mckinney on Hwy 380 a few miles to Hancock's BBQ trailer Bridgefarmer Rd & 380. Both are excellent.

I've been preaching to anyone that will listen to me about Hutchins for almost 3 years now. It is Legit. I've been to pretty much all the big hitters in Dallas, and I like them better than everyone. I ate there On Christmas Eve and might eat there again tomorrow with some out of town folks. I take everyone I can to Hutchins. You gotta try their turkey. It is soooo good. I'm glad you finally made it out Limey. Man I need to come out to a local contest so I can give you back you book that you gave me to read so long ago. 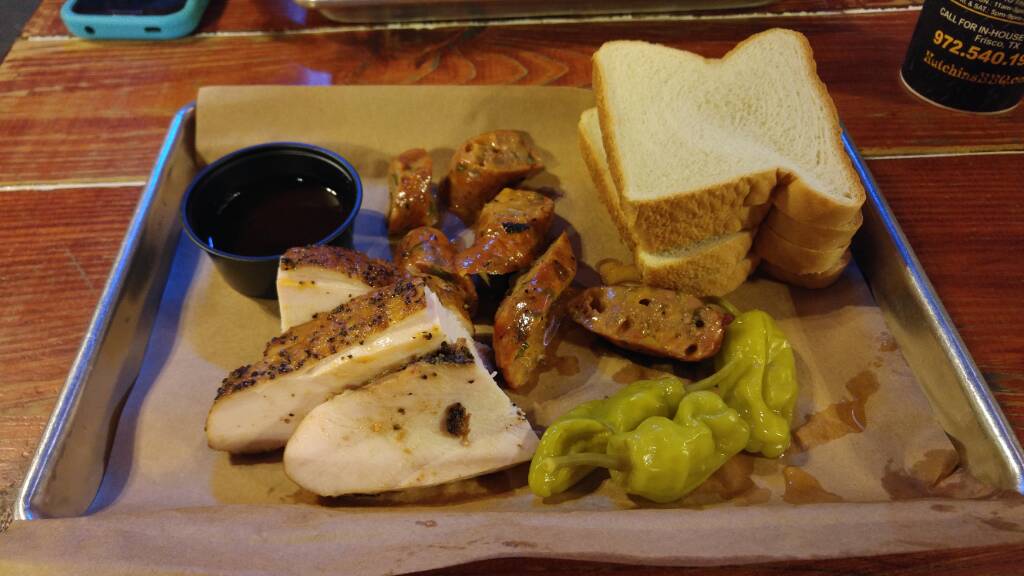 Great place to eat and reasonably priced too! That jalapeno sausage they make in-house is fantastic. Limey, next time you be in the area call and I will meet ya there!

We should do a forum get together there sometime!! Theres a lot of new members on here I'd like to meet.
Can't Beat A Drum!!!

Great idea Ed. We have a lot of local folks and it would be great to put some faces with names. The Frisco location is much bigger than McKinney and we could probably get the room they use for private parties. Let's do this.

I'm in on the group deal.
www.bigcountrybarbecue.com
Top

I'd be interested in this. I already know I like their BBQ. Would be nice to meet some of y'all as well.